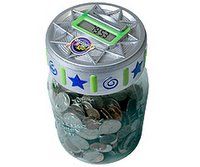 Okay, don't laugh. But my nephew keeps all of his loose change in his Amazing Money Jar Bank, and I've been thinking about buying one for myself for over a year now. I know it's all in my head, but $14.95 just seemed a bit too pricey for me. So, I've been waiting for it to go on sale. And my patience has finally been rewarded. I happened to stop by the local Walgreen drug store today, and saw the same toy on sale for $9.99.

The neat thing about this toy is that it automatically recognizes the amount of each coin as you drop it in the jar and then displays a running total on a little LED screen. So, if you're like me, and you want to know exactly how much loose change you have lying around in the house, this money jar is a great thing to have on hand.
Posted by IRA at 12/12/2006 03:22:00 PM 2 comments: Links to this post

Ben Stein came out with a new op-ed entitled A Season for Peace of Mind. It's definitely worth reading.

My point here is simple: If you're not rich, please don't show off at this time of year by spending money you don't have. It's Madison Ave.'s task to make you think you can spend your way into someone's heart at Christmas. That's fine, but it's not true. No one who can be bought is worth buying. That's especially true where romantic love is concerned. Besides, this is the season of peace. For any real friend or lover or relative, your peace of mind comes first. This is easy to forget at this time of year, but it's truer than ever now. To be broke and scared about money is not what "Merry Christmas" means. Give love, not heartache, this time of year -- and all year, every year.

Electricity Bill to Increase by 22%

Enclosed in my ComEd bill this month was a pretty little pamphlet entitled "Your 2007 bill is changing!" So, you would think this means that they're improving the layout and the format of the bill, right? Wrong.

"Since 1997, ComEd rates have been cut 20 percent and frozen. Your rates will increase in January because the cost of energy has risen and a nine-year rate freeze ends this year. Most residential customers can expect to see an increase of about 22 percent, which amounts to about $13 on the average residential customer's monthly bill."

I finally gave in and bought an Apple 8GB iPod Nano to replace my 4GB iPod mini. The battery on the mini dies after only a few hours of use. Also, I had a $25 credit at amazon.com that I wanted to use before it expired. But I ordered it through target because I wanted to be able to return/exchange it easily. The online reviews indicated that some of the units were defective - something about buzzing noises. Shipping and handling was free, but the sales tax was over $17. Ouch!

To be honest, I really don't need 8GBs of flash memory because my music collection isn't all that extensive. But it's the only version of the 2nd generation Nano that comes in black. And if you've ever tried to clean the white clickwheel on a regular iPod, you'll know why I'm insisting on a black clickwheel. Otherwise, I would have ordered the 4GB special edition Product Red because Apple contributes $10 of the purchase price to the Global Fund to fight HIV/AIDS in Africa.

Admittedly, I could have purchased a refurbished 1st generation nano in black, but my friend says that they're pretty flimsy. The new nanos harken back to the minis and are encased in anodized aluminum. Also, the battery on the new nano lasts up to 24 hours (supposedly), in contrast to the 14 hours on the old nano.

IRA
A 40s, single, female, corporate guppie. Long term goal - to retire early and become a writer. You can email me at the name of this blog at yahoo dot com.